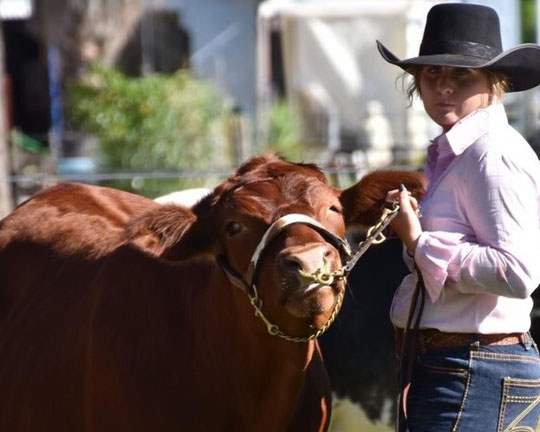 Charleigh Tucker has long been a member of the successful Dalby State High Cattle Show Team and 2021 marks in her final year of high school.

Charleigh comes from a livestock background with her family running a mixed breeding herd of commercial cattle and knows that that is where her future lies. Entering the Cattle Show Team in year 7, she knew she had to start at the bottom but was willing to learn as much as she could from the older more experienced students in the group and also the staff who coordinate and manage the team.

Cattle Show Team Student Manager Sue Burrowes has seen a lot of students come through the program and thinks Charleigh is perhaps one of the best. “Charleigh has excelled in her ability and knowledge of cattle within the team and is an excellent role model for the younger students coming through the program who want to either know more about cattle or are looking for a career in the livestock industry,” she said.

Charleigh has been fortunate to receive an Arrow Energy Agricultural Scholarship which has been beneficial in allowing her to continue her participation in the program.

“The scholarship certainly has helped me in that it has allowed me to continue to be a boarder at Bunya Campus and be an active member of the Cattle Show Team,” she said. “The program is held at the Bunya Campus so I am fortunate in that I can access the training and resources when I need, I couldn’t have been so involved in the team if I wasn’t a scholarship recipient.”

Working with and training cattle requires a hands-on approach, which is what Charleigh reckons she loves the most about being part of this team. “You get to see the growth in the cattle from animals that aren’t used to being handled to these quieter, almost pet like creatures where there is a certain level of trust and respect. It’s also a great way to experience a different side of the cattle industry and become aware of where our food comes from,” she said.

Charleigh has now started her own Limousin stud and is looking forward to applying the skills and knowledge she acquired in the program to her own cattle. “I want to work in the cattle industry and this team and has given me an advantage in that I have a more detailed knowledge of cattle in regards to breeding, nutrition and animal care and welfare.”

Having won many individual and team honours in the program, and against some very experienced competition, it is the comradery that she will miss the most when she graduates from Dalby High at the end of the year. “I started that program because it looked like fun, I’ve learnt so much and have just really enjoyed my time learning and being a part of a highly successful team,” she said.

A boarder at the Dalby High Bunya Campus, at the end of the year Charleigh hopes to be able to move to Canada where she can turn her craft into a career. With her experience and know-how, she’s already on the way.

Arrow’s partnership with Dalby State High School is helping to alleviate the pressure on rural families by offering 10 scholarships, valued at $5,000, to meet tuition and boarding costs associated with boarding at the school’s residential facility, Bunya Campus.